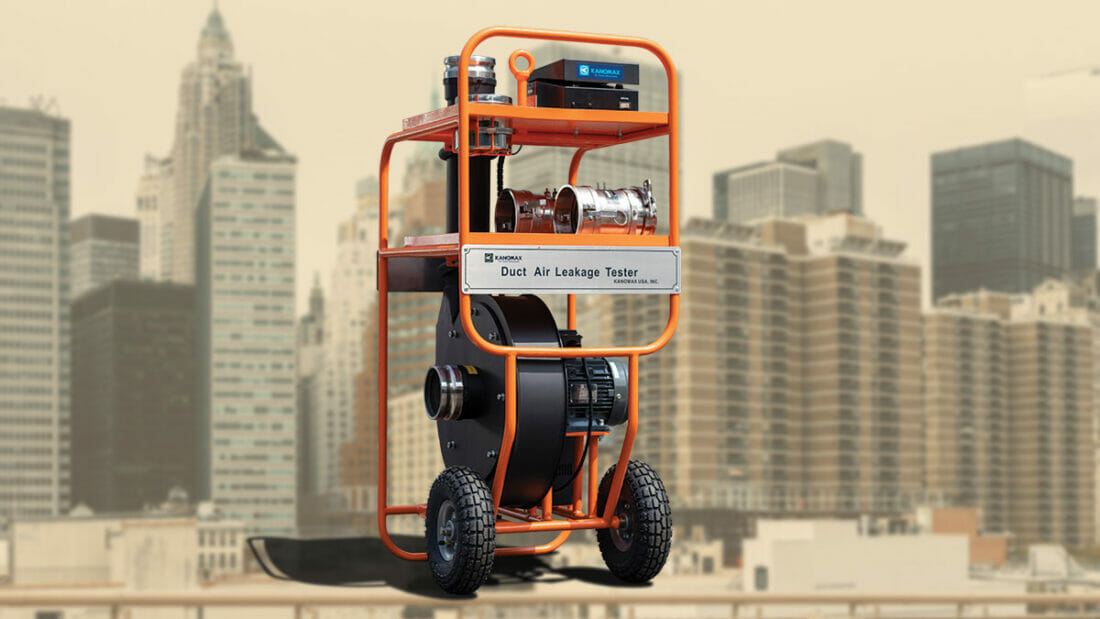 Identify Duct Leakage in Commercial Buildings with the Kanomax DALT 6900

In large commercial and institutional buildings, the leading cause of energy waste (by a large margin) is duct leakage based on studies done by the Center for Energy and Environment (CEE). Buildings use 49% of the total energy consumed in the United States, and of that 49%, HVAC systems are responsible for 32% of the energy. Knowing this, it’s easy to imagine that much of the energy used is simply wasted since commercial ductwork can be made up of tremendous amounts of cubic footage.  Even relatively small leaks end up increasing energy consumption by very large amounts. In fact, in a medium-sized city, only a 5% rate of duct leakage will result in about 380 GWh of wasted fan power over the course of a year in commercial and institutional buildings alone. To put it another way, a typical supply system in a commercial building with 10% of duct leakage can increase fan energy required by as much as 27%. 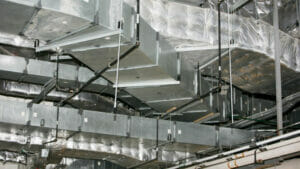 Not only is duct air leakage needlessly harmful to the environment, as it increases the amount of greenhouse gases into the air at an exponentially higher rate than that of a duct system that is operating properly, but it also weighs very heavy on the wallet! In fact, the DuctSense cost estimate of duct leakage, a commercial building in Trenton NJ with a total square footage of 100,000 sq. ft and a 30% duct leakage rate estimates a cost of $637,291.00 over 20 years. The calculations are based on local energy costs and the specific ASHRAE requirements of that area. 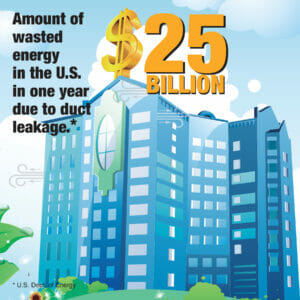 Beyond wasted energy and cost, leaky ducts negatively affect the building itself in several ways. It can severely impact indoor air quality due to the introduction of unfiltered air into the duct system through the leak points. Since the air that leaks inside has bypassed the filters, many kinds of contaminants enter the HVAC system including chemical vapors (possible carcinogens), dust, etc., depending on what parts of the building the building contain leaky ducts. Leaks can also cause mold and mildew problems, which in turn can cause adverse health effects for the building’s occupants either as tenants or daily employees. Not only can unfiltered air enter through leaks, but also unconditioned air, so it is far more difficult to control the interior climate and heating and air conditioning systems will have to work exponentially harder to maintain temperatures. Some rooms or areas might never even receive heated or conditioned air, and some areas might have constantly uneven temperatures.

Many facility owners or managers may believe that their duct system is not at risk of leakage because it is either new or state-of-the-art, etc., but the State Energy Advisory Board reported that a military barracks built only last year and outfitted by certified HVAC professionals with high quality, modern systems throughout, showed a leakage rate of about 20% when tested by the Lawrence Berkeley National Laboratory.

Of course, there are several reliable and relatively inexpensive ways to seal these leaky ducts from mastic to foams, etc., but the first step in fixing the problem is finding out how much the duct are leaking and where they’re leaking from. Specifically designed for testing for duct leakage in commercial or institutional buildings, the Kanomax DALT 6900 is outfitted with the most powerful motor in its class so it can pressurize expansive sections of ductwork quickly. It can switch quickly from positive and negative pressure test settings and boasts the much higher than average static pressure range of ±10 inches of water. Unlike the most comparable duct leakage testers, the DALT 6900 does not require the changing of flow plates when testing different environments, and the speed of the fan can be completely controlled by the mounted full-color touchscreen computer interface. It’s the best way to pin point leakage in your duct system quickly and accurately, regardless of the building size. 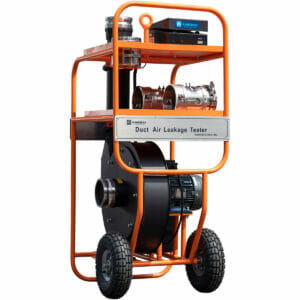